On and In the Air
With Ken Levine
THURSDAY, MAY 5, 2011 -- The altitude must be getting to business traveler Ken Levine. For the last two years, he says he has flown in Delta Air Lines' economy section, but it doesn't sound like any Delta coach cabin I've ever been in.

"You walk on the plane and right away there is a ton of free food and the flight attendants are always coming by with entrées, snacks, ice cream and beverages," he says. "Plus, you get your own row or, at worst, you share it with one other person. There are only 45 people on the plane."

Levine got that kind of sky-high pampering for one reason. He hosted Dodger Talk, a call-in show on KABC-AM radio, for two years after Los Angeles Dodgers baseball games. He also did fill-in work as a Dodgers play-by-play man. That earned him a seat on the team airplane, a Delta jet chartered to save players the indignity and inconvenience of flying commercial with the rest of us mere mortals.

This season, though, Levine has a new gig: radio play-by-play man for the Seattle Mariners, a team he worked for during the 1990s. As one of the voices of the Mariners, he is flying on a team plane again, another chartered Delta jet. But this time he gets an upgrade. 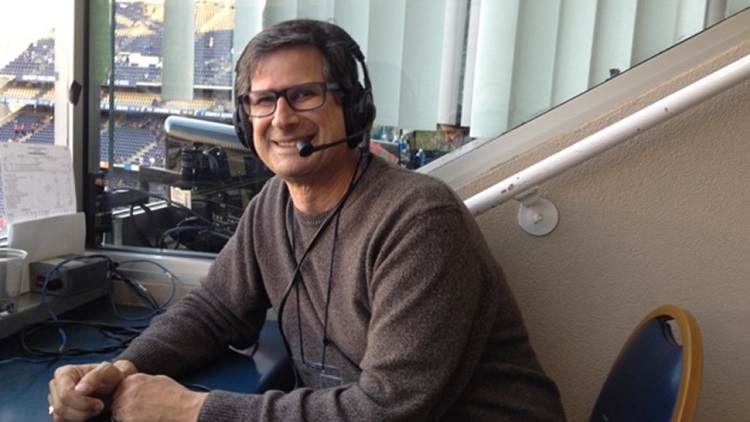 "Manager, coaches, team officials and announcers sit in first class," he says. "Players sit in the middle and back of the plane. It's their sanctuary and [we announcers] don't go back to interview them." The Mariners also appreciate that the same cabin crew is on every flight. "It's really cool ... the same flight attendants actually get to know you," he explains.

The 61-year-old Levine has been on and off the road for nearly four decades. For 30 of those years, he was a comedy writer, director and producer, cranking out big laughs for Cheers, M*A*S*H, Frasier, The Simpsons and Everybody Loves Raymond, among other top-rated series. You may remember the names of Levine and writing partner David Issacs in yellow, stenciled letters in the credits of many episodes of M*A*S*H.

You won't have to think quite as hard to remember one of Levine's episodes for The Simpsons. He wrote "Dancin' Homer." The second-season classic chronicled Homer's accidental rise as team mascot for the hometown Springfield Isotopes and his fast fall when he tried to fill in for a big leaguer, the Capital City Goofball.

Levine mined the business travel lifestyle for what his blog calls his favorite Frasier script. After an ill-advised hotel tryst with Frasier's ex-wife Lilith, Niles (David Hyde Pierce), Frasier (Kelsey Grammer) and Lilith (Bebe Neuwirth) spend much of the episode sparring in a guestroom, hiding room service meals in the bathroom and befuddling an unflappable room-service waiter.

Levine, who's also been the voice of the Baltimore Orioles and the San Diego Padres, is now working on another career: writing books. Where the Hell Am I--Trips I Have Survived, is a chronicle of his traveling days. He's selling it on Amazon.com. He also runs a blog, By Ken Levine, that offers up hilarious tales of baseball, business travel, sitcom writing and more.

For an Emmy-winning comedy writer, Levine doesn't exactly wax humorously about his travails while traveling on his own dime or reward miles. Asked to name his "favorite" airline, he instead launches into a screed about American Airlines. He usually flies American "because we have our frequent flyer miles with them. But American has gotten cheaper and cheaper, providing fewer in-flight services, [making you] pay for blankets, pay for ridiculous snack packs."

He also says that he "directed an episode of Everybody Loves Raymond that was shown on AA's Eye on America, maybe 5,000 times on all east-to-west flights. I got a residual from American Airlines for $1.19. That's right, $1.19. I can't even buy the damn honey nuts for $1.19."

Like many business travelers, Levine leads two lives on the road: one when the company picks up the tab, another when he plunks down his own plastic. The Dodgers, he reports, stayed at "very nice hotels--the Pfister in Milwaukee, Ritz-Carltons in Denver and Pentagon City, Virginia, the Palace in New York City.

But, "on my own nickel, I look for the best bargains, for the best quality." Levine books travel mostly on Expedia.com because he once had a bad booking experience with Orbitz.com. He carries Hertz and Avis elite car-rental status, "but it's all about who gives us the best deal."

Levine is always writing and "loves working on airplanes" because he can squeeze in four or five hours working on a book, blog posts, a script or a play. To power his writing and make flight time creative, he totes an Apple Powerbook, an iPad, an iPhone, Ethernet cables, headphones, binoculars and a black roll-aboard suitcase.

The writer-broadcaster-blogger says he calls them as he sees them. For example, he "loves" Hawaii, especially the luxurious Grand Wailea on Maui and the Kahala in Honolulu, but has rented more cost-effective condominium units for his family the last three times he visited the islands. He also finds TSA security screening "traumatizing. I wouldn't mind if I felt safer as a result of the screening. I do not. It's just a nightmare going through it."

But back to basics. Who are his favorite baseball managers? Joe Torre, whose last stop was the Dodgers during the time Levine was running Dodger Talk. Bruce Bochy, who was with the Padres and is now the manager of the world champion San Francisco Giants. And Lou Piniella, who managed the Mariners in the 1990s, when Levine had his first stint with the club.

"Lou would come down to the [hotel] bar and muse," Levine recalls. " 'Do you think I should have pinch-hit so-and-so in the 7th inning?' He was educating us, so you wouldn't second-guess him."

A 2020 UPDATE
After his business travel book, Levine penned a memoir of his baby-boomer childhood in 2012 and a novel about television in 2013. He's also written four more plays. Going ... Going ... Gone!, for example, follows four journalists in the Los Angeles Dodgers pressbox whose lives change during one game. Levine also continues writing his much-honored blog.